Anglers landed these snappers and do not realize they are illegal or out of season, because they lack the knowledge to identify them. My many years of knowledge and research, I have come up with a method of identifying Gulf fishes to help the average angler identify them.

This blog will explain Gulf Snappers Fish identifications in the Gulf of Mexico to all who read it. This will help Anglers avoid costly tickets from the Florida Wildlife Conservation Commission (FWC) due to landing and keeping illegal fish. Anglers come to Florida to have an awesome time fishing and getting costly and pricey tickets can cause a great outing to become a nightmare when money starts to come out their pockets due to not being able to id what snapper they have caught.

I plan on educating them and this knowledge will help them keep their money in their pockets to purchase what they want and not pay FWC fines.

Think you can identify these snappers? Take the Red Snapper Quiz#1 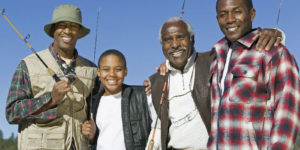 Gods Anglers is a God, Family and Fishing company, with regards to what kind of company we are: Because Gods … END_OF_DOCUMENT_TOKEN_TO_BE_REPLACED